5 Drinking Games you Can Play Outdoors This Summer 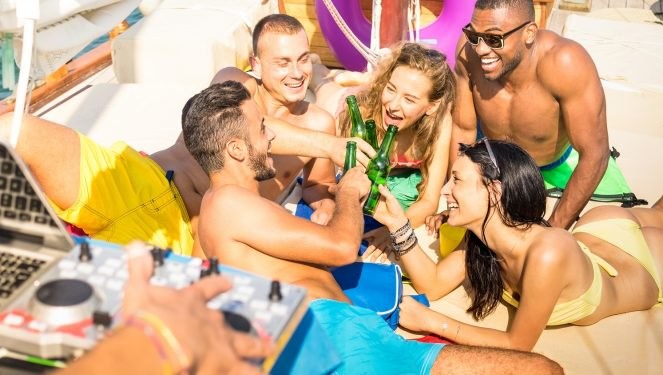 At DRNK Games we love to play games that involve drinking, even if the drinking games are not ours. With summer fast approaching we are gearing up to have fun and drinks in the great outdoors.   Below is a list of 5 outdoor drinking games for adults and those above the drinking age to enjoy.  So grab a beer and a few friends and meet us outside.

For this one, you will need a pool and a floating beer pong set and a bunch of beers. The rules are pretty easy and like regular beer pong.  Two teams of two players get ready to battle in the pool.  Each team takes turns trying to get their pin pong balls into opponent’s cups.  The first team to put a pong ball in all ten cups wins the game.   Every time the opposing team eliminates a cup your team drinks.   Here is a link to the top ten floating beer pong tables.

This quick DIY project will give you and your friend’s hours of hilarious fun.  Go buy an oversized Jenga game.  Write a rule, or take a drink or anything you think would be funny on the bottom of each Jenga block.  Examples; Take a drink, Give a Drink, Beer Bitch, Sing a song, Make a rule, break a rule, Switch shirts with the person to your right.   You get the idea.  Each block should have one rule on it.  Then play the game with the classic Jenga rules, except every time you free a block you must read the block and do as it says right after you place it on top.  If you topple the tower take a shot.

You can either use five-gallon buckets and tennis balls.  If you really want to go big or go home you can go really big and buy 10 red trash cans and a volleyball or beach ball.  Go five trashcans per team and have a blast. 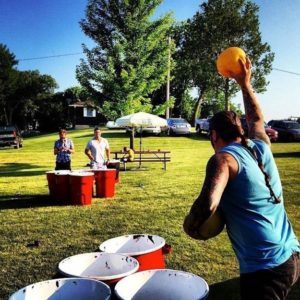 This is an old school drinking game.  All you need is a sturdy outdoor table a bunch of friends and beer.  This game gets a bit rowdy during the thumping, so playing outside on a plastic table is a good idea.  The first thing everyone must do is choose a hand sign and go around the table showing everyone each other's hand sign.  A gesture with your hand can be funny, valiant, or downright rude.  Examples could be a salute, a peace sign with your hand, or the middle finger, be creative.  Everyone sits facing each other drumming their hands on the table.  During this drumming, someone shouts, “What’s the Name of the Game?”  Everyone enthusiastically responds “Thumper!”  The leader then asks, “Why do we play?”  When everyone responds, “To get Fucked Up!” Then the leader will flash his hand sign, then he will immediately flash any other players hand sign.  At this point, the other player will then flash his hand sign followed by another players hand sign, on and on until someone fucks up. He has to chug his beer and he or she is now the leader and starts the round all over again. The game is a fast-paced high-energy game. 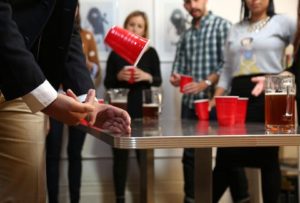 A good call is to play this game outside, as it gets a bit messy.  All you need is a bunch of red solo cups and at least six players. Split the players up into two teams of three or as many people want to play.  Each team will get on either side of a table and face each other.  Each player has one solo cup filled halfway with beer.  The first two players pick up their beers tap their cup and cheer one another as they say “Boat races boat races lets drink a cup, boat races boat races lets get Fucked UP!” Immediately after the little ditty, the first players start.  One at a time, the first player chugs his beer then places his cup upright so the cup is halfway off the table edge.  The player then uses one finger in a flicking motion to try to flip the cup over upside down.  If they fail to do so or drops the cup you must put it upside down on the edge and try again.  Once the first player successfully flips the cup the next player on the team may go.  The first team to have all of their cups flipped first wins.